We had an empty room. We wanted a usability lab. So here’s what we did.

Reinventing the wheel is just not the best way to get things done so I went googling articles and blog posts to find out how other companies have built their usability lab.

There was this really helpful article I found which shared the following set up:

It was an awesome starting point. I also found the chance to pick the brains of other practitioners in the field and learnt that Lookback (https://lookback.io/), while a hot favourite, has started charging for their software.

I like Lookback. I used it before when I was at General Assembly and once when I was helping run a test for the National Gallery of Singapore app. It has a very clean interface and allowed for picture in picture capture which is very helpful. I’ve never used it for a live audience but their newly launched observer’s account looked promising. The only drawback is that I needed a Mac to run the program and I have a Windows computer.

It’s back to the drawing board again to evaluate the other tools uncovered.

We’ve got the TOOLS!

After some experimenting, I managed to breakdown the needs of our usability lab further.

We needed to be able to:

This is the second setup proposed. The tools that are used include Reflector , Faststone , Skype and Chromecast.

This setup was implemented and tried out during an internal showcase (woohoo we now can run usability tests!).

Some problem areas were identified.

We have a WINNER!

Since Skype was causing so much problems, it was removed from the final setup. We took the feedback into consideration and went to our tech guys and requested for their expertise.

We wanted to use webcams this time and use Chromecast to broadcast the audio from the Testing Room directly to the Observers’ Room. They were amazing and provided us with invaluable help.

Setup in the Testing Room. How the webcams are placed to capture the hand motions as well as the facial expressions of the user. The laptop is facing away from the user so he or she will not be distracted by the screen activity. 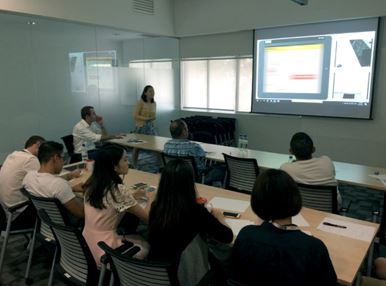 Setup in the Observers’ Room. Handouts for the observers were also prepared so that they can follow along and take notes during the usability test.

What the observers will be viewing (together with audio) over Chromecast in the Observers’ Room.

Our setup works well for us. Next step will be to make this whole setup so mobile that we can also use it overseas or in another location that isn’t our offices. That will definitely come with challenges! Stay tuned.